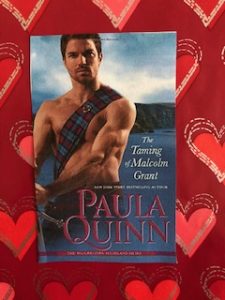 This story, Book Four of The MacGregors: Highland Heirs, is set in 18th-century northern England. Emmeline Grey is blind, but a capable healer. Her unprincipled brother had abandoned her during her tragic childhood in France. Now he has brought her home to his brothel in England. Highland warrior Malcolm Grant and his brother, Caelean, are visiting the brothel to rid Caelean of his innocence. When a patron mistreats one of the girls, Malcolm and Caelean intervene. A man is killed, and the brothers are injured.  They must remain in the brothel to recuperate while danger threatens in the person of the dead man’s brother.

This is a sensual, romantic fantasy with only the thinnest of historical backdrops. There are many toe-tingling love scenes as purple passions (and prose) are unleashed. Trysts in the beds, in the woods, on the beach, and in the sea will leave readers entertained–and amazed that the characters have any energy left to advance the plot. Malcolm and Emmeline do find their happy ending. Caelean is not so fortunate–yet–but his story will continue in a sequel.