This review appeared in Historical Novels Review Issue 79, in February, 2017. 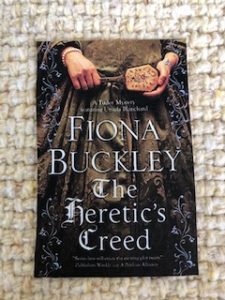 In this 14th book of the Ursula Blanchard Elizabethan mysteries, the year is 1577. Ursula is again given a secret assignment from her half-sister, Queen Elizabeth. As always, she has both personal and political reasons for doing Elizabeth’s bidding. This time, she and her faithful companions, Brockley, Dale, and Sybil, take a seemingly innocent journey to Edinburgh. The assignment is straightforward: hand-carry a secret letter from the Queen to a Scottish contact, assuring him that Elizabeth does not intend to release Mary Queen of Scots from imprisonment. An uncomplicated task–except that two men have already disappeared while trying to deliver this information. There is another job to do, too, as Ursula is requested to obtain a valuable medieval book from a quasi-religious community of women living in a large, isolated, stone manor. Queen Elizabeth’s advisor John Dee, a learned man and noted scientist, wishes to examine the book. These errands appear uncomplicated enough, but Ursula and her friends are soon embroiled in an intricate story of intrigue and superstition during a cold northern winter.

It is difficult to discuss plot points without giving too much away, but Ursula’s fans will enjoy her latest escapades and will sympathize as she starts to realize she is aging. There are glimpses into the long back story, but the book does stand alone. New readers might enjoy starting at the beginning of this engaging, well-written series and following the illegitimate, fictitious Ursula all the way through. She is more interesting than some of the real Tudors.