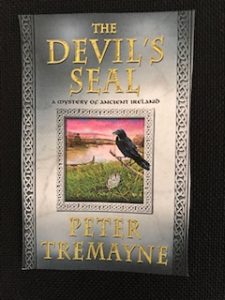 Ireland, 671 A.D. In this 25th book of a series, clerical visitors from the East mystify the rulers at Cashel. The delegation refuses to reveal why they have come. A string of inexplicable murders has Dálaigh Fidelma and her Saxon husband, Eadulf, struggling to solve this complex, early medieval puzzle. When the delegation from Rome finally reveals that they want to determine which religious house will oversee the others, Fidelma cannot believe that this is the whole story. She digs deeper to understand what is really happening. Meanwhile, Eadulf is dealing with a new-found relative and the issue of two working parents struggling to find time for their little boy. Other characters deal with disability and issues of romance as the death count rises, and Fidelma searches for the unknown menace. Peter Tremayne is the pseudonym of respected Celtic scholar Peter Berresford Ellis. Anyone interested in the old Irish language and history should like this book. It stands alone, but will whet new readers’ appetites for the earlier titles. A guide to Gaelic pronunciation would be helpful, but can be found in other places online, such as the Sister Fidelma Society website.