This review appeared in the August, 2015 issue of Historical Novels Review. 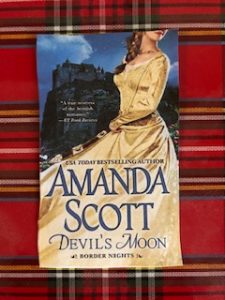 The Scottish Borders, 1428. When Devil Ormiston follows a cattle raider home, he is surprised to find that the thief is 19-year-old Robyna Gledstanes, the twin sister of Devil’s recently deceased best friend, Rab. Robyna is beautiful, feisty, and headstrong. When “Dev” is appointed warden of her family’s castle, the haggis hits the fan. Robby and Dev are at loggerheads, but their love for each other is undeniable, and a really clunky plot device gets them married. Robby learns some decorum, and Dev spanks her only once as the relationship progresses. There is a buried treasure, and a nine-year-old laird whom Dev and Robby nurture carefully. Robby’s dead brother speaks to her frequently, although other characters cannot hear him. Rab’s italicized dialogue coming out of nowhere is probably as startling to the reader as it is to Robyna. As the plot resolves, Dev turns out to be not so devilish, the English are not invading after all, and the villain has some redeeming qualities. This is entertaining fun. It is served on a solid foundation of Scottish history by a multi-published author well known for this type of fiction.