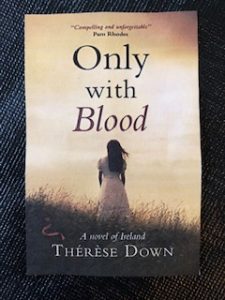 Set in rural Ireland during World War II, this gripping story combines family drama with nerve-wracking political thrills. As 17-year-old Caitlin Spillane is sold into marriage with a much older man, certain Irish factions are trying to forge an alliance with Nazi Germany and overthrow the British. At first these strands do not seem to be related. Then Caitlin meets covert IRA man Donal Kelley, and the two plot threads start to intertwine in frightening, heartbreaking ways.

On her husband’s hardscrabble farm, Caitlin continues her schooling while cooking and cleaning for him. At first seeming like a reclusive boor, Jack Flynn soon emerges as a complicated man with tragic reasons for his behavior. He is old at 43, prematurely aged by his difficult life, and made ill by it. Caitlin detests him and the bargain her father made that trapped her into this marriage. She and Flynn mostly play fair, and she takes care of him stalwartly–albeit with little grace. Donal has hurt and compromised his own family, but makes up for it as best he can. He loves Caitlin from a distance, and manages at least in part to get back at the Spillanes for what they did to her. Donal makes a pivotal political decision during a moment of crisis that will change his life–and probably Caitlin’s–forever. This story’s resolutions at least provide satisfaction and closure for the reader, if not entirely so for the characters.

Readers should not start this book in the evening, or they will be up all night. A multi-layered, compelling page-turner, this is a must-read. Highly recommended.