This review of the late poet Douglas Nicholas’s debut novel appeared in the HNR Issue 63, February, 2013. He went on to publish three more titles in the series, the last one posthumously. 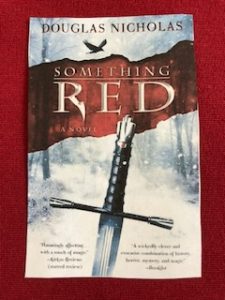 In 13th-century England, four travelers try to cross the rugged northwestern Pennines during a harshly cold winter. The formidable but nurturing Molly, her enigmatic granddaughter, Nemain, and Molly’s strange but stalwart lover, Jack, are all more than they seem–as the young apprentice boy, Hob, discovers during the journey. All the troupe’s skills and strongest character traits will be tested as a terrifying, supernatural danger follows them from monastery to inn to castle. It is sheer evil, it is implacable, and they may not be able to stop it.

Partly a medieval historical novel, partly a horror story, and partly a love story–of more than one pair–this tale is seasoned with strong lashings of fantasy, mythology, and coming-of-age. Hard to pigeonhole, this is the debut novel of an award-winning poet. The language is lush and evocative, but the reader is not tempted to linger over the beauty of the prose. The racing plot keeps pages turning, and nervous types should not read this book alone late at night.

The shocking but satisfying resolution does not quite end the story. There is a second ending that is more positive, if a little predictable. The reader who has become engaged with these characters will want more. There is no indication that a sequel is on the way, but fans of Molly, Jack, Nemain, and Hob will be asking, “What’s next?”

This book is highly recommended even for those who don’t usually like this type of thing. Give it a try.