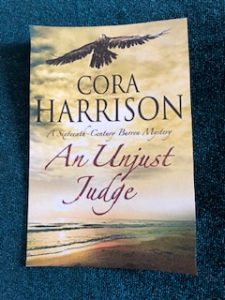 I reviewed this story by multi-published Irish author Cora Harrison for the February, 2017 issue of Historical Novels Review. I have gone back to the first book and read them all in order, but I didn’t realize until just now that  An Unjust Judge was the last in the series. The story stands alone, but readers may want to obtain earlier titles to follow the characters’ back stories. Harrison lives in the Burren, which gives these mysteries a strong, authentic sense of place.

This is the fourteenth Burren mystery, set in western Ireland during the reign of Henry VIII. It features the sleuth Mara, the Brehon of the Burren. Now in late middle age, Mara continues to serve as a judge dispensing justice under Brehonic law and also solving mysteries. A new judge metes out unduly harsh sentences to five miscreants and is then found gruesomely and creatively murdered. Naturally the five offenders are suspects, as is a very young widow, and others who have motives. Mara must investigate the crime, although it has taken place outside her usual jurisdiction.

As she sifts through too many suspects, the reader may discover the murderer early on, but Harrison is an expert at laying false trails, and the true resolution isn’t revealed until the end of the book. There is a really dramatic seacoast scene that will leave readers reluctant to dip a toe in the Atlantic ever again. As usual with this series, the unique,  scenic Burren and adjacent areas are characters in themselves.