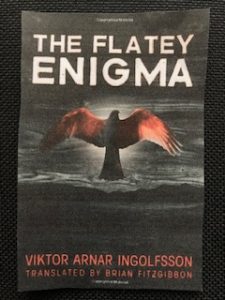 I wanted to step away from Christmas books this week, and recommend something  for a good winter read that isn’t holiday-oriented. This review appeared in the August, 2012 issue of Historical Novels Review.

When seal hunters find a decaying corpse on a deserted Icelandic island, it triggers an investigation involving a secret runic code and a medieval manuscript. The body turns out to be a Danish intellectual who has been missing for months. A second victim is later found mutilated in the old Viking fashion. Kjartan, the district magistrate’s representative, is charged with finding the killer. He eventually solves the mysteries as the plot winds slowly through the quiet, austere, near-subsistence lives of the Flatey islanders circa 1960. The author lived on Flatey as a child, and the stark simplicity of the islanders’ lives comes through with vivid authenticity.

This Glass Key prize-nominated book moves slowly at first, with much emphasis on the remote Nordic setting. Readers looking for those best-selling Scandinavian thrillers that have been so popular recently will not find them here. This is a tale of people who eat fermented shark, start fires with dried bird skin, and hunt seals for food and fur. Every chapter ends with an excerpt from the Viking sagas found in the Flatey Book (Flateyjarbok). Often brutal and barbaric, they provide clues to the enigma that Ingolfsson has created and woven into the story. This book is complicated and intense, with Icelandic names making it difficult for an English speaker to keep track of the players. There is also a love story and a touch of whimsy.

The book is a one-off. It does not really compare to anything else, but Viktor Ingolfsson is a successful, multi-published author, with one of his six mysteries used as the basis for an Icelandic television series. The Flatey Enigma  is worth a look.