This World War II Christmas tale’s review appeared in the May, 2016 HNR. 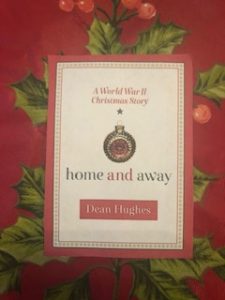 During World War II, Glen Hayes is away fighting in Germany while his parents, younger brother Dennis, and two little sisters worry and wait at home in small-town Utah. This Christmas story alternates between war-torn Europe, where Glen deals with the horror of battle, and the family’s mundane life, with its strains of low income and class differences.

As Christmas approaches, Norma and Hal Hayes endure their tense marriage, with Norma often being wounded by Hal’s unkindness. Hal is hurt in his own way by feelings of inadequacy. Dennis struggles to accumulate enough money for Norma’s special Christmas gift, while exploring the thrill of a first crush. Sharon, age six, and nine-year-old Linda are the only family members seemingly unaffected by the miseries of wartime. Suspense builds as the Hayeses agonize over Glen. The reader will also worry as Glen’s outfit, the 101st Airborne, endures hellacious conditions during the Battle of the Bulge.

This is a short, sweet book, a nostalgic read that could make a nice holiday stocking stuffer. Readers should keep tissues nearby, as tears may start to flow toward the end of the story.