I reviewed this unusual, wintry book in the November, 2012 issue of Historical Novels Review. 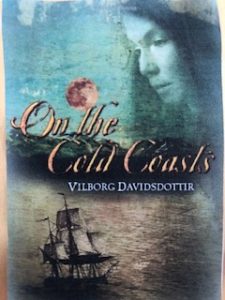 In 15th-century Iceland, Ragna Gautadottir is innocently put in an unfortunate situation when she is fourteen. Impregnated by an English sailor who then disappears, she bears a child and is considered a fallen woman. Medieval Icelandic society is dominated by men and by the church., and in this moral climate, her fiancé repudiates her. She eventually becomes a bishop’s housekeeper, and her former betrothed becomes a priest. Their love rekindles, but Thorkell cannot marry and Ragna refuses to become his concubine. Against the backdrop of Icelandic society and the international and church politics of the time, Ragna strives to build a good life for herself and her son.

This portrait of a medieval woman and her life in a cold, rugged land is fascinating. Iceland is a character in itself. Flashes of the Viking heritage illuminate the bleak, grim story, especially in the fight scenes toward the end of the book. Some may find it difficult to understand why Ragna’s parents made her so vulnerable or why she continues to be drawn to an unsympathetic leading man. The book’s ending does not fully resolve the story; a sequel would be welcome. Davidsdottir is a multi published author of Nordic historicals, but this is her only title translated into English. It would be nice to see more.