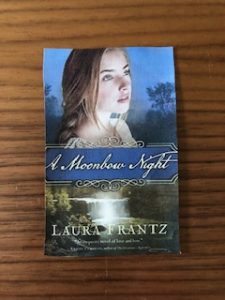 I read and love so many books set in the United Kingdom and Ireland that an American setting can be a refreshing treat sometimes. This one has stayed in my mind since I reviewed it for the February, 2017 issue of Historical Novels Review. Part of my family lived/lives in rural West Virginia, and Frantz’s setting is close enough geographically that it tugs at my emotions and reads “home” to me.

This story opens in 1777 near the scenic Cumberland Falls in what is now the state of Kentucky. It takes settler Temperance Tucker and frontiersman Sion Morgan on a journey of hardship, danger, and emotional pain. As swarms of pioneers push through the Cumberland Gap into Native American lands, the Indians push back. Sion and Tempe both have experienced tragedy in the past, suffering greatly due to Indian activity.

Tempe guides Sion and his surveyors through beautiful, treacherous lands to the Green River country. Facing peril all the way, the two fall in love, but are haunted by their pasts. Even more harrowing problems loom in the wilderness as cultures clash. It is doubtful whether Sion and Tempe can even survive, much less work through their individual traumas well enough to build a life together. This is a Christian book, although not a “preachy” one, and the characters’ faith supports them throughout their distressing frontier experiences.

Laura Frantz is a Kentuckian who lives in a log cabin. Her writing portrays a gritty, rooted reality that helps bring three-dimensional texture to the story. Recommended. 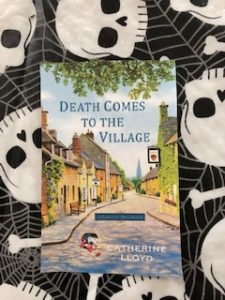 I reviewed this cozy village mystery in the February, 2014 issue of Historical Novels Review. This was the first of what turned out to be seven Kurland St. Mary stories, with the seventh coming out next year. What I remember about this one is the spooky graveyard scenes that made me just a little jumpy and uneasy.  Readers unfamiliar with the series might like to start here. This book would be an entertaining read during the Halloween season, and a nice introduction to Robert and Lucy.

England, 1816. In the charming village of Kurland St. Mary, Major Robert Kurland is confined to bed, recovering from wounds suffered at Waterloo. His old friend Lucy Harrington, the duty-bound rector’s daughter, has been of great assistance to him. When Robert sees something suspicious outside his window in the moonlight, he enlists Lucy to help him discover what sinister events may be unfolding in this peaceful backwater. Together they investigate thefts and possible murder, unaware that their own lives may be in danger. A blend of cozy mystery and Regency romance, this first book in a series has enough dark undertones to give readers the shivers. The mysteries are solved satisfactorily, but enough loose ends are left dangling to ensure readers will want to see what happens to Lucy and Robert in the next book.  Recommended. Lloyd is London-born and holds a master’s degree in history from the University College of Wales. 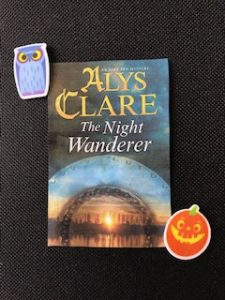 I reviewed this book for the May, 2013 issue of Historical Novels Review. I think that it would make a better October read! My review says it all–and, no, the stickers did not appear in the magazine. 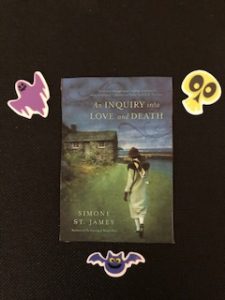 Some years after World War I, Oxford student Jillian Leigh must leave her intensive studies and go to the seacoast village of Rothewell to identify her dead uncle and pack up his personal effects. Uncle Toby had been a ghost hunter, and there is no doubt that terrifying events in Rothewell called for his services. The reader will wonder why Jillian does not simply retreat from such a frightening, clearly supernatural threat, but her reason is soon revealed. Uncle Toby was murdered, and Jillian feels that as a family member she is honor-bound to help Scotland Yard’s Inspector Andrew Merriken discover the particulars. An old, unquiet ghost is not the only danger facing Jillian and a cast of intriguing village characters. Suspense builds as another, more modern peril looms. Jillian goes through harrowing experiences as she tries to sort out the circumstances of Uncle Toby’s death and the truth about who she really is. A love story winds its way through the plot which, in its own way, imperils Jillian as much as the ghost and the criminals.

This story is a keeper. There is some uneven pacing at first, with slow spots that impede the tension rather than build it, but this is a minor quibble. Anyone who loves Daphne du Maurier and Victoria Holt will enjoy this book. Readers will cheer for a brave, intelligent heroine fighting overwhelming odds to defeat evil, help people both dead and alive, and find her own happiness at the end.

This second novel by the author of The Haunting of Maddy Clare is highly recommended, but don’t read it alone at night.

Six years ago I read and reviewed  this novel. The review appeared in the November, 2013 issue of Historical Novels Review. As I recently shuffled through my old reviews–all 83 of them with a couple more pending–I realized that this story was one of my favorites. I purchased another copy of the book, re-read it carefully and critically, and liked it even more the second time around. I’m giving it a permanent home on my bookshelf.  Here is the review: 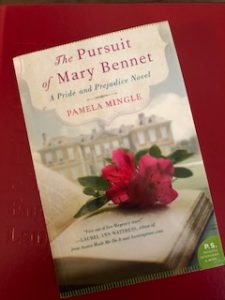 This Regency novel is a continuation of Pride and Prejudice. It takes place a few years later, and focuses on Mary Bennet. Jane Austen portrays Mary as awkward and irritating, but now Mary has changed. She is a good sister and daughter, she has managed to polish her own rough edges, and it looks as if she will have her own chance at love and marriage. A pleasant young landowner seems interested in her and perhaps she will not be the spinster sister after all, left at home to care for her chronically unhappy parents. Jane and Lizzie, both happily married with children, are pleasant and supportive. Devious Kitty seems to be trying to snatch Mary’s suitor, and the deplorable Wickhams cause dire problems that may undermine Mary’s hopes for a happy future. Without ever stepping outside the mores of the time, Mary continues to mature, and builds herself into a strong, worthy woman as she struggles to find happiness and security for herself and those she loves.

This novel is hard to put down. As an emotionally deep story of one woman’s re-invention of herself, it is a character piece that transcends genre. Anglophiles will love the masterfully-drawn scenes of the English country settings and the elegant prose with its British voice–always difficult for an American author to get right. Highly recommended.

After almost nine years of writing book reviews for Historical Novels Review, I thought I’d like to share some of them here. I’ve discovered some “keeper” authors and series while writing for HNR.

Reading critically has led me to be more selective about what’s on my own bookshelves. Most of my books are adult historical fiction of one kind or another, but I also have Young Adult titles, non-fiction, and even a few children’s books that are so enchanting they deserve a place in anyone’s library. (Scuffy the Tugboat. No laughing, please.) There is a good deal of fantasy, mystery, some good reference books, and even a three-volume set of The Complete Calvin and Hobbes.  I’ve always been a reader as well as a writer. I was always that girl with her nose stuck in a book–and I still am. I want to share some of that fascination and excitement with others, but how do I quantify magical fairy dust? What is it about a story that can pull people into another life, another land, another century–and make them hate to leave it?

I don’t have a cookbook recipe for what makes a compelling read, but I do have some ideas–and some books to recommend that I think others will enjoy as much as I do. You should be seeing a new post every Friday morning. So welcome to my blog–I’m looking forward to taking this journey with all of you.

I’ve been writing and publishing short non-fiction under other versions of my own name since the early nineteen-eighties. I’ve had a long career in health care, which segued into some heavy years of family caregiving and the resulting aftermath. I’ve always thought that a writer needs something to write about–and being ringside for birth, death, and every other stage of the human condition certainly provides the material. I think caregiving–that nitty-grittiest of lifestyles–helps to inform whatever type of art you’re attempting–whether it is writing, drawing and painting, music, or something else.

I’ve lived across the USA in seven different states, on the American territory of Guam, and in Sweden. Currently, and I think forever, home is in New York’s mid-Hudson Valley. I share my space with a small dog, a harp, a piano, two guitars, and many, many books.