This 1600s England-to-New York family saga was later followed by To Capture Her Heart and To Follow Her Heart. I eventually reviewed them all, but this first book introduces the Hortons. My review appeared five years ago in the November, 2014 issue of Historical Novels Review. I’ve always felt that the author being a descendant made the stories more real, even though they are highly fictionalized. 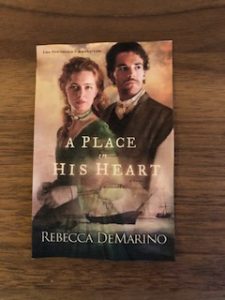 Based on actual family history, this story opens in 1630 England and ends in 1640 Long Island, New York. Mary Langton has been jilted at the altar, but later falls in love with widower Barnabas Horton. She marries him knowing that he still longs for his dead wife, and much of the story relates how Mary raises his sons, manages their home, and accompanies him to America. Barnabas had not told Mary before their marriage that he planned to emigrate. Mary seems almost too good to be true as she leaves everything behind her to go to a new land with a man she knows does not love her. Her seeming barrenness is another problem for the couple. It is difficult to understand why Mary, with every advantage of beauty, personality, and background, would accept a man who is quite open about the fact that he grieves his dead wife, and only needs a mother for his sons, a bedmate, and a housekeeper. Mary’s history of being jilted is said to have made her unmarriageable in their village, but this seems unlikely. Her motivation seems to be simply that she loves Barnabas and will put up with anything to be with him.

Scenes set in England are vivid, but the story really takes off after the family comes to New England in 1637. They leave Massachusetts for Long Island, where their marriage meets one final test. A heartbreaking secret from Barnabas’s past is revealed, and he and Mary are finally able to look forward as a family to building their home and their church on Long Island.

This is a compelling debut for author Rebecca DeMarino, the ninth great-granddaughter of Mary Langton and Barnabas Horton.