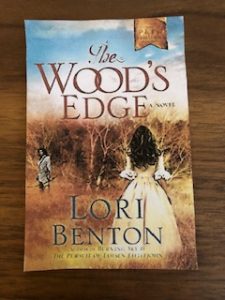 I’m fortunate enough to live near many French and Indian  war sites. Fort William Henry in Lake George, NY,  makes an easy day trip, and while it is a reconstruction, the sense of history there is strong.   I reviewed The Wood’s Edge,  in the May, 2015, issue of HNR.

In 1757 when Fort William Henry falls to the French and Indians, Major Reginald Aubrey switches his dead newborn for a live Native American baby. Aubrey’s wife is not aware of the deception, but the Indian mother–actually a white captive–is conscious and remembers what happened. As the years go by, the Oneida family mourns for their lost child, and eventually discovers his whereabouts. Major Aubrey is tormented by guilt as he raises He-Is-Taken to believe he is William Aubrey, a British gentleman. William’s Oneida twin, Two-Hawks, secretly watches the property. He and Aubrey’s adopted daughter, Anna, fall in love.

The suspense is drawn out over many pages, as both William’s Native-American and English family and friends are deeply affected. Major Aubrey, widowed and tortured by his sin, has difficulty accepting new love from healer Lydia–who has always known the truth. William is horrified when he discovers his true identity. He disappears into Canada, even as his two families come together in determination to find him.

This novel is gripping but clearly needs the sequel which will come out in 2016. (I plan to post my review of A Flight of Arrows next week.)